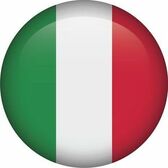 2nd Project meeting in Sermoneta-Italy
07th-14th April 2019
During the 2nd project meeting in Sermoneta,Italy which was really creative and successful, the coordinator teacher of the host school Mrs Cecilia Santoiemma and also the headmistress Mrs Giovanna Tufarelli, and other teachers of the host school welcomed the guest partner teachers and pupils from:Greece,Lithuania,Spain,Bulgaria,Slovenia
The programme included:
On the arrival day of partners (Sunday the 7th April), after the welcoming of the guest pupils from host families, a welcoming coffee bouffet was offered by families at the Primary school of Pontenuovo-Sermoneta.Then, dinner of all partner teachers in the hotel restaurant followed.All guest teachers were accommodated at Park Hotel in Latina,Italy.
The second day Monday 8th April 2019 we had an early departure for Doganella school.There was a fine warm welcoming by the headmistress Jovanna Tuffarelli and the coordinator Cecilia.Then,students presented theflags of participating countries,sang the European Anthem and the Italian natioanal anthem.Performances with pupils'choir and musical instruments followed under the instructions of the music teacher, Luigi.Later,all pupils participated in "Games without frontiers" in the Gym.At 12:00 the coordinators' project meeting took place where many things about the project were cleared up, questions answered and problems solved.Lunch was offered by parents where pasta dominated.At 3:00 we departed for Sermoneta castle.We learnt everything about the history of the old castle.Later,an animation in the castle followed where all pupils participated.Meanwhile,teachers were guided into the town and the oldest Catholic church of the area.The day ended with dinner at an Irish pub in Sermoneta.
Tuesday 9th April,2019
Teachers of Pontenuovo school welcomed us.The headmistress showed us around the facilities and introduced us to teachers and staff .Fourth graders presented songs, medieval dances while a band of an accordion and a traditional percussion instument musician played traditional music.A professional dancer showed us traditional dances of the northern and southern parts of Italy.Both teachers and pupils participated in the singing and dancing sessions.We also shared body percussion activities taught by the music teacher.He stressed the importance of of combining body movements with sounds and instructions and how much this method helps memorise.School life went on attending Italian language class and maths under innovative ways of teaching following lesson plans.A wonderful live chess performance took place in Sermoneta.Later,Ninfa Gardens having the 2nd place in beauty worldwide,as the guide told us,astounded us.The meeting with the Mayor of Sermoneta was really interesting as the Mayor's welcoming speech was sealed with exchanging of gifts and a meal at a traditional restaurant offered by him.
Wednesday 10th April,2019
Norma school with a warm welcoming activity,singing and playing music by pupils.A traditional recipe was implemented by a local lady.Traditional cookies for the Easter holidays were prepared and all pupils tried their hand at it.Parents took over the baking.Meanwhile,we visited the Ancient Norma where guides explained everything about the ancient civilization of the area.The ruins of the city built on the top of a hill revealed a very rich civilization of the past.Although it was raining we reached the archaeological museum which hosted loads of remnants of the ancient town's beauties.Later,lunch (lazagna)was offered by parents at school.The cookies had already been prepared and given to pupils and teachers.Chocolate museum was the next place of visit.There,we've been informed about the history of chocolate,shown around the museum and tried some liquidated hot chocolate and bought chocolate bars of various flavours.Later,we were offered dinner by the Mayor of Norma.Some of us tried horse riding as the restaurant was part of a farm

Thursday 11th April,2019
Doganella Media school.Pupils had the chance to make works of Art following the instructions of the Art teacher Paola Brighenti.In particular,they drew on pebbles.Teachers tried their hand as well.A short walk to the shopping centre took the place of our trip along Cavata river.Due to heavy rain the trip was canceled.Later,we had lunch at Valle dell'Usignolo offered by the Mayor.In the early afternoon we were driven to Doganella for the Polenta festival.All teachers,pupils and parents joined the festival.It was offered by Polenta Commettee of Doganella.Dinner and certificate award followed.
Friday 12th April,2019
Early departure for Rome.First,we visited the museum of Generali Insurance Palace in Rome.There,we've been taught by two talented Italian actors in a short theatrical performance about the decade in Italy during Nero's reigning period.We had lunch at a well known Italian restaurant which served all types of Italian pasta.There,the Italian teachers told us the story of Bolognese pasta and how it aquired its name.Later,we visited the most famous sights in Rome (Colloseum,Trahanos column,Palatino,Castelo de San Angelo and the Bridge,Piachia Navona,Piachia San Petro,Via della Conciliazione,Fontana di Trevi,Fontana di quatro Dio,El Senato di Italia,Pantheon,Arc de Konstantino)Back to Latina for a farewell dinner at Forma restaurant with lots of traditional dishes
Saturday 13th April,2019
Early departure for Sperlonga,a beautiful town about 1:30 away from Latina.We visited the ancient ruins of Tiberius(2nd Roman emperor) villa.The museum built just nearby the ruins was full of exquisite Greek decorative statues.The marble complex depicting Ulyses in Skyla and Charivda,the enormous statue of Polyphimus blinded by Ulyses .We had a walk in the beautiful town of Sperlonga and admired the architecture of the buildings.The narrow streets gave the impression of a welcoming and warm neighbourhood resembling Greek islands' interior of towns.Later,we were driven to Gaeta were we saw Santa Maria Antalucia church with the impressive decorative ceiling and unique paintings on the walls.A second important church was decorated by Borboni family.Then,the Split Mountain was our final destination.Also very impressive was the chappel built on the edge of the cliff protruding just above the sea.The view out of the chappel was breathtaking.
Sunday,14th April,2019
Departures